Throughout George Orwell’s novel, Animal Farm, the animals are stricken with “forgetfulness”... or are they? Although published in the 1940’s, Orwell’s novel is still relevant today and examines language and the usage of it to convince — if not — manipulate a society.  The novel starts strong with a revolution where animals take over a human’s farm. The reader cheers on their success as they collaboratively create commandments for their society basically creating  their own utopia.

As the story evolves, things shift, as they do in any society, and subtleties sneak up on even the wisest of characters. One of the subtleties is the language of the commandments. They are mysteriously revised throughout the tale, so much so that the animals think they’ve mistaken the original commandments.  “No animal shall drink alcohol, to excess.”  The animals stare at this and realize they must have forgotten as their recollection was the commandment originally stated that, “no animal shall drink alcohol.”  As the critical reader goes back to reread the initial Seven Commandments, it is understood that Napoleon, the self imposed leader of Animal Farm, took to drinking in excess, going against the original seven commandments.  Two small words changed the farm’s message and original philosophy.

Zoom in. Look closely. Question. This is what my students begin to comprehend….

Along with Orwell, the Grade 8 students are introduced to the speeches of vital public figures such as Martin Luther King Jr., Robert F. Kennedy, and Malala Yousafzi. This is accomplished in a variety of ways, through listening, reading and watching videos. This process of sharing these speeches is strategic as I want them to consider how audiences connect to language in different ways. The students analyze these speeches to see how the chosen language of these figures share their belief systems, impact their audience, and impact history itself.

The next step in their unit on language is to consider how language impacts their day to day life.  What are the words and phrases of eighth graders in 2017 and the people who surround them.  Hypothetically, what impact can a simple statements like, “That’s a stupid question” have on people, or, “I really like how you shared your ideas in class today.”

A few words are capable of changing how we look at ourselves. The unit soon progresses to the students considering their own beliefs and passions. They’re asked to choose words carefully and consider how to share their ideas via a podcast.

As the students reflect about themselves and determine the best way to deliver their message, they develop their communication skills, one of the IB's Approaches to Learning. Throughout this process, while students analyze the words of others along with their own, they're reading and writing with a more critical mind. This skill of using language effectively is not just important for English class, but is a vital tool for all areas of school and life in general. 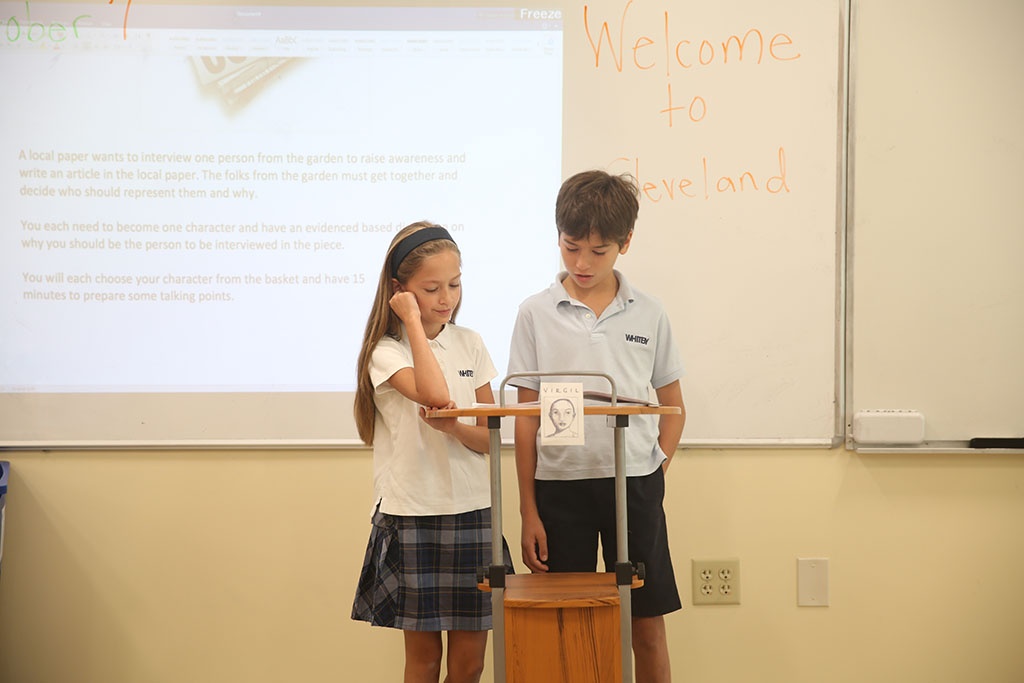 Through these podcasts we learn one student believes in laughter, one believes the role of the underdog, and one in the detriment of unresolved family riffs. While working on this the students start with a big idea and tease them out through various steps including brainstorming their ideas, questioning their focus, drafting, conferencing, revising, and finally recording, and revising that initial recording again, possibly a few more  times. When considering the importance of language the students will explain that revising and experimenting is a key element to success - as will any public figure or prolific author.

In a time when a plethora of content fills our inboxes, texts fill our phones, and fake news is intertwined with legitimate news, our hope is that our students, as well as ourselves, learn to be critical readers of words and ideas and images, and to heed Orwell’s prophetic warnings  not to be duped by subtleties.

Anne's main interest and goal in her role as a teacher is figuring out how students learn, and works to meet them at that point; she is constantly strategizing how to ensure that her students "get it." She is an avid reader and loves that her job revolves around words, written and spoken. When she's not at Whitby she can be found outside anywhere with family, friends and her energetic black dog.