Whitby School has a richly diverse community comprised of families from all over the globe. There are 29 different languages spoken among our school’s population. In our Stepping Stones class alone more than a dozen students hear multiple languages at home. In some cases, one parent speaks one language while another speaks a different language. Sometimes it can be a caregiver who speaks another language. And in many cases both parents speak a language at home other than English.

In the process of meeting our new Stepping Stones families at the beginning of the year, we heard one common concern. They worry that speaking more than one language to their toddler will confuse them as they learn to talk, causing a delay in their child’s expressive language. Often the cause for concern comes from observing that their child’s vocabulary is not developing as quickly as other children their age.

As a parent, I had similar concerns about my youngest child. For the first two years of his life we had an au pair from Brazil who spoke to him mostly in Portuguese. My husband and I would come home from work and speak to him in English. Either way he seemed to understand everything we said, but he wasn’t speaking as much as his older brother and sister had at his age. Both of his siblings talked and sang incessantly as toddlers. Their vocabulary was vastly broader than our youngest.

My husband and I were a little worried, but suspected that it might have something to do with his exposure to two languages. Our son seemed on target in every other aspect of his development except for talking. He also spent most of his time with a caregiver at home, while our older children spent their infancy in childcare at school. We did a little research and decided to wait and see what would happen. As it turned out, after a few months in Whitby’s Stepping Stones environment our little one was as chatty as his older siblings. 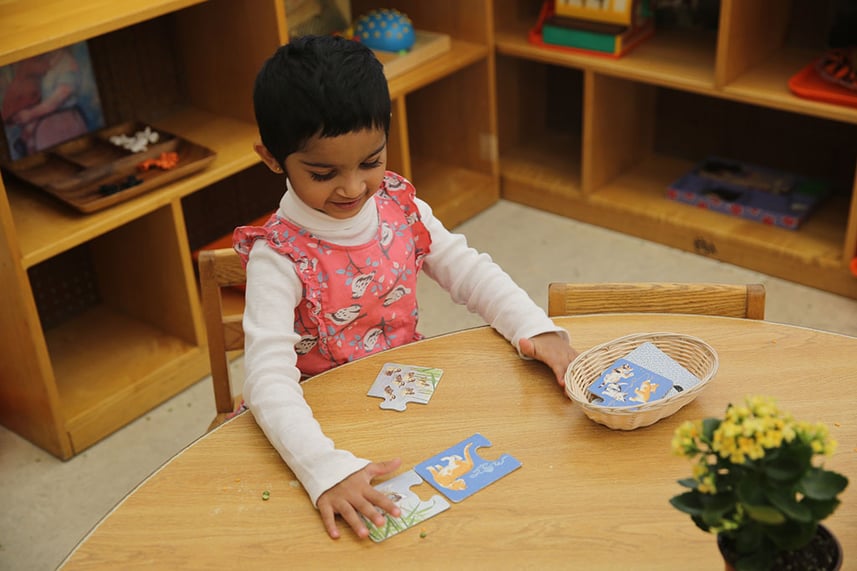 What The Experts Say about Early Childhood Bilingualism

Fortunately, our instincts were right. But not long ago it was believed among educators and clinicians that exposure to a second language hindered a child’s intellectual and academic development. More recent studies, however, have found that speaking more than one language from birth through childhood can actually make a person smarter. The reason for this is that the brain is forced to work harder as it develops, strengthening a child’s prefrontal cortex, the part of the brain where executive function resides. According to scientific studies, bilingual children are better able to focus, plan, prioritize and make decisions. As children get older they tend to score higher on cognitive tests and possess more effective communication skills. Many studies have also found that bilingualism can also help prevent dementia in old age.

In a Psychology Today blog post, Dr. Judy Willis, a board-certified neurologist and middle school teacher, compared a child’s developing brain to our muscles when we work out regularly. The brain appears to build strength, speed and efficiency in its executive functioning networks when tasked with the extra effort of deciphering more than one language. Another article in The New York Times Science section entitled, “Why Bilinguals are Smarter,” reiterated these findings.

I don’t want to say my youngest is smarter than his older siblings, but I do notice a difference in his ability to focus. At five years old, he seems more observant than his older brother was at this age, and he has a better ability to sit still and attend at circle time than his sister did. This correlates with what experts say about the long-term benefits of brain development in bilingual children. Evidence from a number of studies suggests that bilingual children are better at planning, solving problems, staying focused and performing various other mentally demanding tasks compared to children who speak only one language.

Brain development in children from birth to age six is so staggering, that many times as adults we are astounded by its capacity. We underestimate how much information our youngest children are able to learn and retain. So, when our Stepping Stones parents apologize for speaking to their toddler at home in their native tongue, we assure them that they are doing the best thing for their child. In fact, we encourage them to keep on doing it, so that their child does not lose the ability to speak their first language as they develop in a mostly English-speaking school environment. And hopefully the cognitive effects of growing up bilingual will reward their child throughout the rest of their learning journey.

Elizabeth Melucci is a certified Montessori teacher in the Children’s House at Whitby School. This is her 17th year teaching here. She is currently working with toddlers in Stepping Stones C and worked with children ages 3-6 years in Primary. Mrs. Melucci is the mother of three children, ages 17, 14 and 7. She loves working with children because every day is an opportunity to learn something new!