The Buddy Program has become a staple here at Whitby School. And while it certainly makes for good photos, the goals of the program go much deeper than optics — it builds confidence in students and strengthens school community. We sat down with Library Assistant & Community Service Coordinator Beth Ferrer to learn more.

First things first. Can you just give me an overview of the Buddy Program here at Whitby?

Beth: The Buddy Program originally started as being between Primary Three students and sixth graders from the Upper School. As time went on, we decided that the kids were enjoying it so much and there was so much community being built that we decided to expand it. And so the Lower Elementary (LE) students got in on it and were originally with the fifth graders. Within the last year or so, we ended up swapping that — Primary students are with fifth, and the LE students are with sixth, so sometimes there was a continuity as they grew into those upper grades.

Why was that switch made?

Beth: If we switched it and had the Primary students — who are the younger ones — with fifth grade, then by the time some of them moved up into LE, they could potentially be with a sixth grader. It doesn't always work out, but we're trying to build that continuity.

What would you say the main benefits of this Buddy Program are?

Beth: That's one of the first things that I ask our kids when we're getting together to talk to them about buddies. I ask them why they think that we should have the program or why we do, and they're pretty spot on with their answers. They say things like, "It's fun," which yes, it's fun. They also say things like, "It gives Upper School students and Lower School students a chance to bond in a sort of mentor-mentee kind of role."

It allows the Lower School students to go upstairs so that upstairs is not such a scary place anymore by the time they move up. It's familiar to them. They've been upstairs in all the rooms and taken tours, so that's a good thing. The last time I was talking to the buddies, the younger ones actually came up with this, and they said that it gives them confidence to talk to older students, which I found fascinating.

Have you talked to some of the Upper School students about how they feel about it?

Beth: We went through the same thing and they usually come back with some of the same answers and they enjoy just finding commonalities, so typically the Math Department will host one of the meetings and we work together, or they come up with their own idea of what should happen. Usually with the youngest ones (Primary students), they get together with their buddy and they'll do a Venn diagram, and they'll overlap, so they'll find out what a Venn diagram is. They discuss it a little bit beforehand, and they find commonalities between each other. It could be a language. It could be that they both have two dogs. It could really be anything, so it's a lot of fun and it's a fun way to break the ice and for them to get to know one another.

How do you go about finding the different activities that they end up doing?

Beth: It depends on who's hosting it. Sometimes I have the ideas. Sometimes the Lower School teachers have the ideas, and sometimes it's the Upper School teachers. One year when we were doing something with Spanish class, we had a scavenger hunt where we all met in the gym and the kids had to find a particular book that matched what their scavenger hunt clue was. Then they would read together with their older buddy in Spanish.

One of the things that you mentioned earlier is that it builds community. Why do you think school community is so important?

Beth: It gives kids confidence — that they're accepted and that they bridge the gap between the two levels of school. They feel a commonality. They feel like they can talk to a different division, and then they feel like they're accepted. They all work together to have a strong school. It sounds like the Buddy Program is a simple idea, but we're really working to create confident, collaborative, open minded students from the minute they walk through the door at Whitby. When they graduate, they take with them this enormous tool box of skills and creativity once they leave.

What is more of that thought behind the Buddy Program system, aside from oh, this is a great photo op right now?

Beth: Aside from building community, it makes students feel like they're a part of something. It makes them feel accepted. If they feel accepted, then they're more likely to accept other people. We're building this open minded group of team players and team leaders who can then take next steps.

For Upper Schoolers, it's fifth grade and sixth grade involved with the buddies. Is there ever an opportunity to involve seventh and eighth grade?

Beth: At that age, we feel that kids could go off campus and do community service. This year we're switching it up in terms of the amount of activities and commitment for seventh and eighth graders have made it. We're not requiring volunteer hours this year. Instead we're putting out opportunities and hoping that the students take them. We're trying to embed a lot of the service and action this year into the curriculum, One of my tasks this year, is to meet with all fifth, sixth, seventh, and eighth grade teachers and see how we can promote action within each unit. When you do something and have a hands on component, you tend to remember it a little bit more. 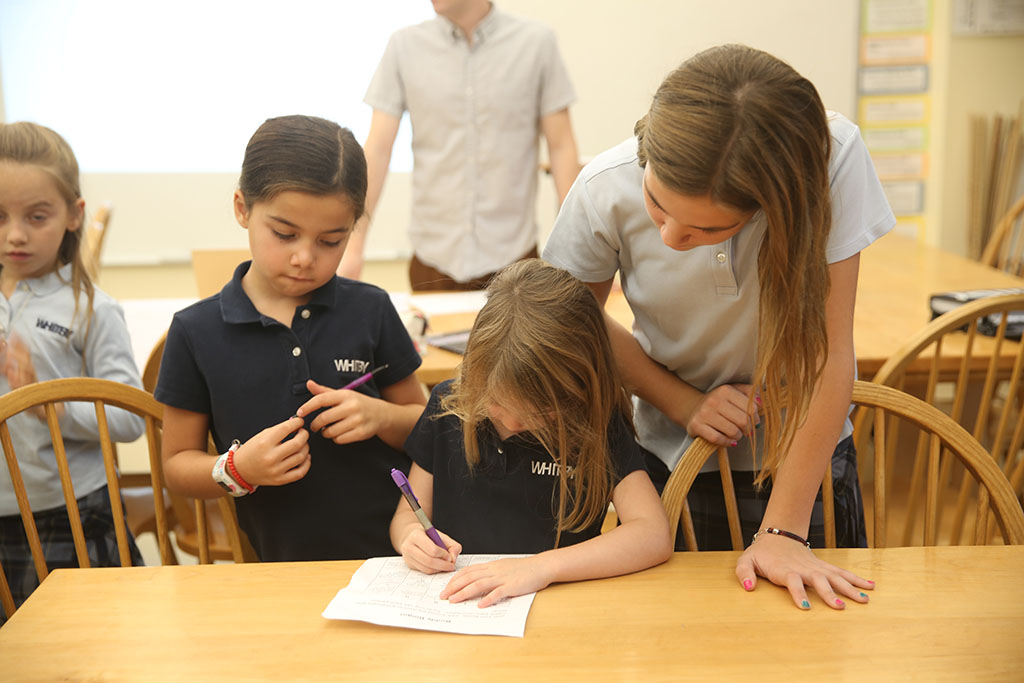 You mentioned yesterday was one of the first get to know you sessions. How does that relationship between the buddies kind of progress from there? It started off with that initial get to know you. And then what happens next?

For example, the Primary students shake hands with their teachers every morning, so we encourage older students to shake hands or give a high five, and to make eye contact. These are, again, developing skills that we all need that are sorely lacking in the day and age.

We also talk to them about how they can form a connection, and a lot of that is just asking questions. That's sort of what Whitby is about too. Right? Asking questions. If you don't know what to say to your buddy, ask them a question. They love to talk, then that becomes reciprocal, and then from that they just build a connection. When they see each other in the halls, they give a high five. When they see each other out in the community they say, "Hey. There's my buddy!" and they're excited about it.

Is there any kind of background that you give the Primary or LE kids before they go upstairs?

Beth: I meet with the LE kids and I do the same thing in class and we talk about buddies. That's when they tell me what they think it is or what they've heard, and about previous experiences if they've already been a buddy. We talk about what the program is about and they get excited. Every time I show up they're like, "Is it buddies?! Is it buddies?!"

Have you heard from any students in the Upper School, so either a fifth grader or sixth grader, who's kind of reflected on being on both sides of the Buddy Program?

Beth: We're actually just butting up to the point where the fifth and sixth graders would have been buddies, but it'll be great to hear that perspective going from mentee to mentor.