I Am Eleven Provides Important Window for Upper School Students

Last Friday, Upper School English Teacher, Jamie McQueen, headed a field trip for students, parents and teachers to the Bow Tie Cinema in Greenwich to see the highly praised documentary  "I Am Eleven." The experience provided Whitby students an opportunity to glance into the lives of other 11-year olds from around the world, catching a glimpse at the commonalities and differences between them. 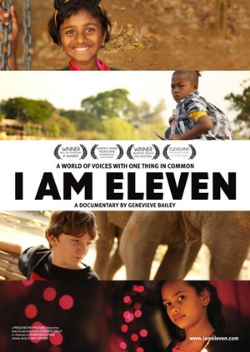 Students discussed the film and will continue to use it as a point of reference throughout the year.  Here are some reactions collected by Mr. McQueen:

“The movie gave me the opportunity to see mindsets of kids from different cultures...such as their thoughts about education.”

“Seeing peoples' homes from different parts of the world gave me perspective on what I have.”

“The French boy was rather humble and thought of others a lot....his family used solar panels and he thought about others around the world...not proud...he said, "I am a citizen of the world and not just France."

“Really liked that they showed kids and their thinking, such as the American girl was a stereotype and other kids were simply different and not judged.”

“The range of kids from around the world gives me different perspectives.”

“I liked how the movie showed how hard life was for different kids. The girl from New Jersey complained about school while other kids wanted more school.”

“All the children seemed happy...smiling faces...grateful for what they had.”

“This was my first documentary and I liked it.”