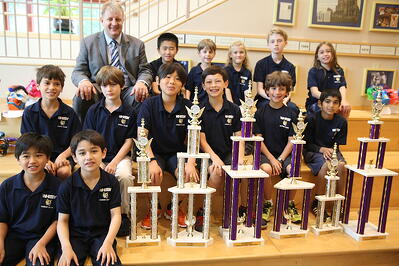 It’s hard not to notice the gleaming and teaming trophy case that greets you as you enter Whitby School's Renaissance Hall.

What may not seem apparent at first glance is that many of the trophies lack the figurine on top, frozen in a state of running or kicking—Whitby has its share of those accolades as well, but what has been elbowing for more room are the impressive accomplishments from a comprehensive chess program that is only two years old.

In light of Whitby’s recent success at the U.S. Chess National Elementary K-6 Championship, we asked some of the parents to reflect on the Chess program at Whitby.

“Whitby Chess has grown a lot in the last two years for two reasons - ” says parent Rajshri Suryawanshi, “commitment from parents and support from school.”

Team tournaments happen more than a dozen times a year—for those chess competitions, schedules and transportation concerns must be met, and Whitby parents have stepped up to the challenge.

Suryawanshi continues, “Parents whose kids are involved volunteered for different tasks to organize and plan out for events like Nationals—which is very important since there are lots of details involved when we [travel with a] group of kids.”

Whitby Chess: A Tailored fit for the International Baccalaureate Program 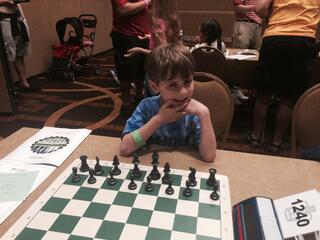 “There are many Whitby parents who appreciate the value in playing chess,” comments parent, Nancy Lu. “They support their children's desire to play by setting aside time to take them to tournaments and sharing their knowledge and experiences with one another. The children also learn from their classroom teachers who consistently teach them the IB traits: inquirers; thinkers; communicators; risk-takers; knowledgeable; principled; caring; open-minded; balanced; reflective.  To be a good chess player, one needs to think calmly, deeply and creatively while keeping in mind the opponent's perspective before making a decision.”

Chess offers a chance for anyone, regardless of size, strength, age, or means to participate and compete. Nancy Lu points out that “It is very empowering for children as young as 5 years old to be in the driver's seat: making decisions; experiencing the consequences of their actions; and learning to advocate for themselves when necessary.  In a role reversal, the adults are asked to sit down, be quiet, and be respectful of the children concentrating on their games.” 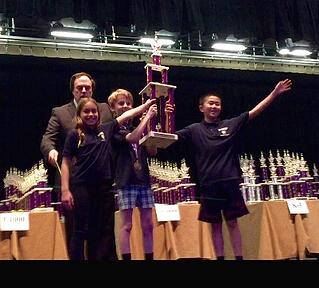 As for the experience of 2000 chess enthusiastic children all lining up across one another in a room the size of a stadium, Nancy Lu says, “It is like a rock concert, but much quieter.”

Rajshri Suryawanshi, adds, “The experience at the tournament was rich in values, parenting, and sportsmanship. We had a group of players from 5 - 12 years old. All the participants played 7 games in 3 days. This was really beyond normal human ability to stay focused that long for the given age group span. The outcome of the games varied for each player, good or bad, but they were ready for the next game with the same spirit, with one passion - help the team win some points!”

When a team plays chess, points are attributed for play.  The cumulative points are tallied and those “teams” with the most wins, sit atop the podium at meet’s end.  But, getting to that team result requires individual performance, at the same time, wholly dependent on the support of teammates.

“I did not anticipate just how much stamina, conviction, and emotional strength it would take”, says Lisa Scinto Hall, “when you lose, it’s a let down.  When your teammates struggle, you feel their struggle.  But the camaraderie and support it fosters in simply stunning.  I am so proud of the team, not only for its success but also for its support of one another.  We only celebrated victories.  We did not dwell on losses.” 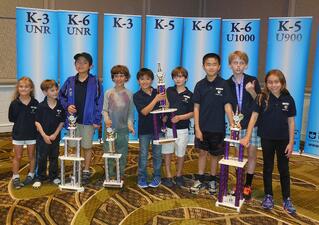 “Whitby’s method of teaching fosters the thinking skills needed in chess.  Whitby’s inquiry-based learning engenders the implicit notion that there is no single correct answer.  Chess mimics this thought process. Chess has an almost infinite amount of games.  Depending on how the game develops, there are a multitude of ways to achieve checkmate.  As in chess, inquiry-based learning presents a problem and the students are encouraged to analyze the situation and choose their best solution.  Then you re-analyze at the next juncture.  If you do not expect a single solution, your mind opens up to all the possibilities, which is a skill necessary in chess… and in life.”

More information on the Blitz round can be found here.