During the Winter Olympics, all eyes were on Sochi. But, here at Whitby in the Design Technology classroom, 6th and 8th grade students were focused on the history of the games and on everything from analyzing the development of athletic equipment to the significant role geography plays in choosing an Olympic location.

The transdisciplinary unit of inquiry, “Sports in Technology,” threads together humanities and science with design.

Whitby’s Design Technology teacher, Leslie Perry, explained, “Design touches almost every aspect of the Olympics. From the infrastructure of an Olympic city, to the uniforms, to the equipment...the Olympic games are not only the premiere athletic contest, but a culmination of some of the best design science has to offer.” 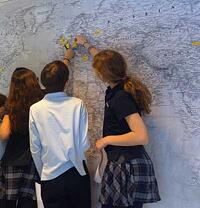 Students began the unit by talking about the importance of climate and geography. In one case, students discussed the difference of the snow quality in Salt Lake City, where the American team trains versus the snow in Sochi. After conducting research, students concluded that due to the high altitude in Salt Lake City, the snow is drier, and therefore, faster; while Sochi is at sea-level and therefore the snow is wet, making for an entirely different athletic environment. While it is a prestigious honor to host the Olympics, students explored why a country might not be able to host, due to the high cost or to lack of infrastructure and political factors that might remove a country from contention to host.

While discussing the advancements made in equipment and uniforms, students inquired about the testing process that occurs before new designs are put to use. Students compared the development process of the new two-person American bobsled and the improved speed skating uniform, both created particularly for use in Sochi. After much discussion, research and critical thinking, students found that because the speed skating uniforms were not tested on the athletes until their Olympic debut, it may have caused the lackluster performance from the American speed skating team. However, students discovered the development and testing for the new bobsled was much more thorough, tested on various tracks, enduring scrupulous and comprehensive aerodynamic design tests before it was introduced in the games.

This research provided tangible answers to their questions, but as scientists, students wanted to know more and asked: At this high level of competition, how much does the equipment and uniform matter? In today’s world, how reliant are athletics on the newest design? Will design and science have an increasing effect on athletics? What other aspects can influence an athlete’s performance? To answer these questions, students met with School Counselor and Life Skills teacher, Rachel Clark, to talk about mindsets. Students worked on diagrams mapping out the mental, physical and emotional requirements to be an athlete of Olympic caliber. View the template for the mindset task. 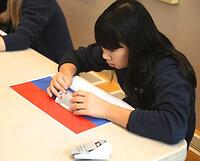 As a culmination of this unit, students participated in a challenge to design their own bobsled. Based on a project developed at the Museum of Science in Boston, students raced their own bobsleds on a track built in Whitby’s lobby. Students reflected on what they had learned during their research of the new American bobsled and applied it to their own projects. During the design phase students considered force, gravity, weight and all contents the sled would encounter while on the track. Through trial and error, risk taking and problem solving, students engineered aerodynamic and stable bobsleds. Sixth grader Mauricio explained, “After testing our bobsleds, our team figured out how to make our sleds heavy enough with clay and faster with popsicle sticks attached to the bottom.” His teammate added that building their sled was like “solving a puzzle and really made you think like an engineer.”

Throughout this unit, students were able to make applicable connections to a historic and international event. Whitby’s IB curriculum focuses not just on what but why. It is important for students to see the depth at which design and science are involved in a global athletic event such as the Olympics to fully understand the power of technology and its impact on our world.

Social Studies for the 21st Century: How participatory action empowers students
A Future We Cannot Even Imagine
Visit to Dominican Republic Provides Adventure and Perpsective
The Joy of Learning at Whitby