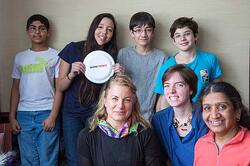 Four Whitby School "Mathletes" qualified for the MATHCOUNTS State competition in Hartford on March 8, each ranking among the top 30 students at the Southwest Chapter Competition held this past Saturday, February 8, 2014, at Fairfield University.

Whitby was reportedly the only school in Connecticut with all four of its teammates placing in their region's top 30. Out of 190 students competing from 29 schools, team members Caroline Lui (8th grade) and 7th graders Jacob Buehler, Neev Suryawanshi and Eric Osband will advance to the States. In addition, Neev steadfastly represented Whitby in the Countdown Round (top 12 students overall) but lost against the overall winner, Steven Ma. Nate won a MATHCOUNTS frisbee for answering a challenge question.

"It was a thrilling experience," exclaimed Annette Osband, Upper School Math Curriculum Coordinator and Math Teacher. "All I can say is that we have some serious talent at Whitby, but it also took serious work and preparation. It is sometimes not easy to have your child do yet another mock sprint round on a snow day, or stay on top of their ALEKS pie. Yet these efforts pay off in the long term and free us from the shackles of near-mastery to conquer new heights."

Raj Surywanshi, Neev's father, added, "As an official Connecticut MATHCOUNTS volunteer for the Connecticut Society of Professional Engineers," the organization that sponsors the competition, "when I told some of the officials about our school,  they couldn't believe our achievement in only our second year of competition! This just proves our solid IB teaching methodology, along with having talented kids!"

Whitby School, a co-ed independent school in Greenwich, CT, develops fearless achievers from 18 months through 8th grade who are inspired by discovery through its engaging and innovative curriculum. Whitby is the founding school of the American Montessori society and is triple-accredited by the American Montessori Society, the International Baccalaureate (IB), and the Connecticut Association of Independent Schools.