Whitby's math team success was featured in a recent article by Greenwich Time.

Qualifying for the state championship gives a sense of Whitby's commitment to building enthusiasm and excellence in mathematics. Over the past few years, Whitby has also connected with area schools to create opportunities for students to have practice math scrimmages. This has given students a chance to engage as participants and spectators, and grow their interest in the subject.

"It's neat that there are events where like-minded kids get together and get excited...if the high expectation is that kids will have fun doing this, then that's something we can definitely reach." says Jonathan Chein, Head of Upper School.

This year's Whitby team counts 3 seasoned mathletes, Jacob, Neev and Eric, who are double accelerated in math, which makes for a significant advantage in both experience and comfort with the material. The fourth, Noah, is a seventh grader completing Algebra 1 and also very talented. Noah was an individual participant in last year's competition.

Chein asked 8th grader Neev to share his favorite MathCounts question - this one in particular was comical to Neev as he immediately realized the probability is zero: 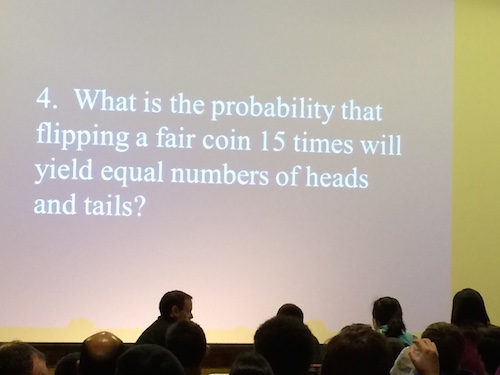 What Changed this Year: The Coaching Strategy

Last year, all Whitby participants qualified for state on an individual level, but they did not qualify as a team. Because of this, coaches turned their focus this year to building their capability as a team. In their joint sessions they worked on old Mathcounts team rounds. The team coaches observed them and rotated the role of team captain. Then they each had to write a reflection on how they would handle the role if they were team captain, and what makes a good team captain.

"Their team process was very successful in this year's competition," says Annette Osband, "They solved 8 out of 10 problems correctly in the team round. We learned from last year's mistakes where the 4 team members qualified to go to state as individuals but not as a team because they argued over problems while working together!"

Grooming our next generation of mathletes:

"All I can say is that we have some serious talent at Whitby, and let's keep working at it. As Mark Twain said: The only place where success comes before work is in the dictionary." wrote Upper School Math Teacher Maureen Malley to teachers in a recent email announcing the news.

The electives aim at preparing our many talented students for competition math. Whitby is exceptional in the pool of students we have been able to attract, and groom. Your team is only going to be a one-year success if it's made of 8th graders who graduate the following year. If we do a good job at inspiring and developing our junior team, we can continue to have stable, strong competition performances in years to come.

"The math program at Whitby nurtures students' natural enthusiasm from an early age, and stretches them in novel ways," says Osband. "We always have a mathematical curiosity or challenge problem up our sleeves to inspire them to think in new ways. The classroom encourages a sense of mathematical play that fosters students' independent thinking and willingness to take risks at all levels."